So said the forecaster on Thursday about the impending superstorm that would hit Melbourne and Victoria over the weekend. Living, like Shrek, in the swamp of Elwood, this fills me with a bit of nervousness. And although our house is just out of the  1in 100  flood line, and we have yet to be flooded (although others in our street have), you still have a nagging doubt (what if it’s a 1 in 500 event). And when you are 1000 kilometres away presenting at a conference on children and disasters the anxiety increases!

We don’t have a formal flood network in our street. There is a flood action group, which is focused on infrastructure solutions to our flooding problems (build a bigger pipe!). But through years of street parties, and kids going to the local schools, there’s an informal network. So, I got onto this network, and shared a bunch of information about preparing, flooding, where to get info, where to get sandbags. I used email mainly, but we also have a facebook page for our street (facebook is always telling me that I haven’t posted much to it, well cop that!). Being so far away, it made me feel useful, and helpful. It is also a form of digital volunteering. You don’t have to be in the same place to volunteer.

The conference ended, I flew back to Melbourne (expected to be delayed, but wasn’t), expected to be stuck in a cab for 2hrs, but came straight home (the cab driver said, the streets are great, I wish the bureau would issue these warnings every Friday night). The worst of the storms had passed Melbourne by (at this point). And of course if it doesn’t happen in Melbourne, it hasn’t happened (like any of our capital cities). The northeast of Victoria was getting bucketed, but here was relatively dry. And out came the doubters and the arm chair experts. “How could they get it so wrong”

Coming from a family of weatherwatchers, this fascinates me. Meteorology, while improving dramatically, is an inexact science. The Bureau acknowledges this:

We must remember that the atmosphere is a ‘chaotic’ system whose chief characteristic is extreme sensitivity to initial conditions. Small-scale motions in the atmosphere are random and complex; small errors are magnified as the length of the forecast period increases. There may well be a definite time limit for which specific forecasts can be made – probably about two weeks.

I liken to trying to predict the final score of a football.  You have a lot of data at your finger tips, player form, team form, match ups, conditions, record on the grounds etc. You may generally predict the outcome, but you cannot predict the final score. Or there may be the one out of the box, the upset, say North Melbourne vs Adelaide earlier in this year) Adelaide were on top of the ladder, unbeaten, had the superior side on paper. North Melbourne were bottom, had a young side, but were playing at their home in Hobart. All the predictions pointed to a strong Adelaide win. North Melbourne won by sixty points. There are many variables in the game. A star player has an off day, or is well blanketed. Players don’t adjust to conditions. There’s a run of free kicks etc etc. Its inexact, unpredictable. Think about the word unpredictable. You don’t know.

Will there be a boy who cried wolf syndrome? Possibly. Just trawling through some of the social media comments, one news items, they seem largely supportive of the Bureau’s position. That would be a nice little study. It will be up to the authorities, the BoM, the SES, and the Emergency Management Commissioner to explain what has happened, congratulate people on the steps that they have taken, remind people of the inexact nature of the weather, encourage people to keep prepared. One guy I spoke with as we were looking at the water in the canal said “ I think they have done a great job, it’s better to be warned, and then you decide what to do with that” It does make you realise how powerful the weatherman and weatherwoman are!

But it was predicted to be a three day event. And on Saturday. The rain came. Not heavy, but constant. And the canal started to fill up. It was game on.The SES were very proactive, getting out closing roads, and doorknocking low lying areas. People were prepared. Houses sandbagged, cars moved. The challenge was going to be the high tide, which was scheduled for 3.30am. It can push a metre of water into the canal, and if that meets flood waters coming the other way, it gets messy. But the canal held. Checking on it a few times, there was certainly a lot of water in it, but not breaking its banks. And there was no microburst activity. It was constant rain, which was able to pass away. But being able to monitor the stream gauge, you could see have variable it was, and how quickly: by up to a metre in 20minutes. All it would have taken was a thunderstorm upstream, and adding another metre, starts pushing it into people’s homes. 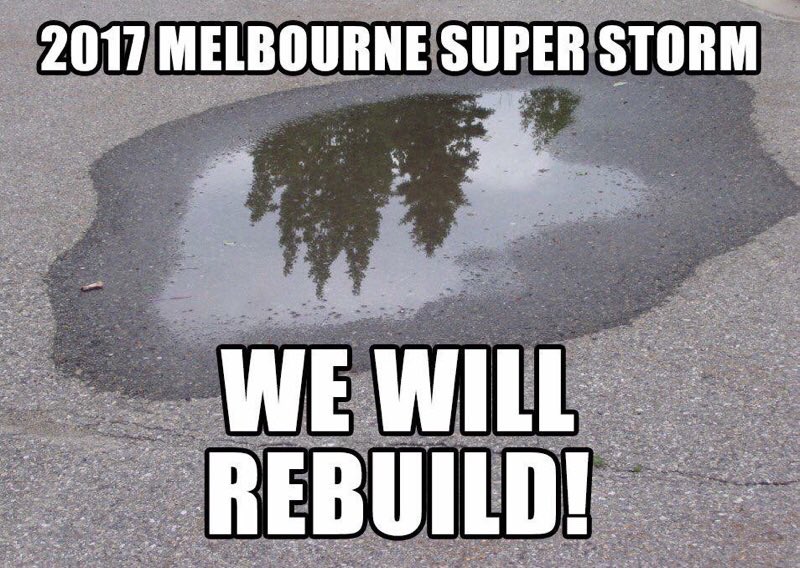 The sun has started to shine, and the water is drying up. We dodged one this time (again).

One thought on “Ten out of ten”