Today was the first time that I returned to Marysville after the Black Saturday bushfires in February 2009.Driving there, i had a bit of trepidation. MArysville was always  a bit special for me. Our Grade 6 camp was there. We stayed at Mary Lynn, went to Steavenson’s Falls, and Lake Mountain. it is one of my enduring memories of Primary School. In later years, I thin I went through Maryviless almost every weekend to go cross country skiing.Hot chocolates at the tea rooms were the order of the day.

It was fortunately a beautiful Victorian Autumn day, cold crisp morning, golden light, mist in the Yarra VAlley. Out of HEalesville, I expected not to see my favourite forest, the Mountain Ash forests of the Black Spur. There is one section, when you round the corner, and the road is straight , flanked by massive eucalypts, standing there since the 1939 fires. Mountain Ash is thin barked, and does not survive fire, although in the eucalypts inimitable style, it will seed and the next generation will start. The forest was there. It was a good feeling. Driving into Marysville (listening to The RAah Project’s Will you be there), the town was, well, a town. It was beautiful, golden trees, green valley, spaces filling up with buildings. It is not the Marysville of our hearts, but it is there and back and deserves our support (only half the town’s population have returned, and it is struggling) 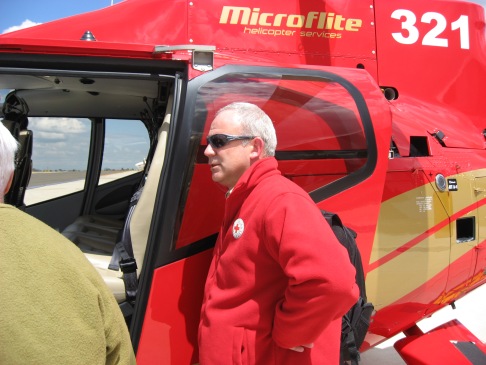 that flew to Marysville to look for sites for community hubs. We flew along the Marysville Rd, and I didn’t recognise the town, until we were in it. Landing on the oval, we were met by one fof the local police. The town was still closed as the search went on for bodies. It was a sepia toned smoking ruin. As we drove around town, there were a number of incongruities, why had gardens remained intact, and houses gone?, play equipment survived, the elderly couple in a car driving

around town, the last remaining residents, having survived the fire were not going t

o leave now, and in the centre of town, was the post box, still standing, outside the ruins of the post office. Bright Red. The only colour in the whole landscape. It felt as though, despite the crisis that had befallen Marysville, Australia Post had deemed the post must  be delivered, and put a new box in. It looked brand new. It had survived. I learnt later from a police colleague, that Marysville didn’t explode in a fireball, as the media had breathlessely described, but in fact the town burned down from embers lodging in buildings, and with no one to extinguish them, the houses burnt down, leaving garages, gardens, play equipment and incongruously, a Red Post Box. And the post box is still there.

We stopped at the ruins of the Cumberland, where not a couple years before we had our DHS planning days there.  The copper said we are looking for three or more people in there. How come? Three cars were parked outside. As turned out later, the parents of a young man that was in a bereavement support group i helped run, died in one of the bathrooms of the lodge, entwined in each other, seeking shelter

I also had to return here. As we walked around, we asked the police liaison what the blue tape was. He said, his voice running at a million miles an hour, “they mark where bodies are found”  I think about this place a lot, the place where a young woman, heavily pregnant, drew her last breath, just metres from the safety of the oval, where the CFA had retreated to and had the fire trucks protecting 60 of the townspeople. So close, but as the cliche goes, so far. These are the tragedies we deal with, and they happen. Life is dangerous (and we have tended to forget that, as we think in this age of information and technology, we can control everything) .And it is these circumstances that confirms me as an atheist, because in my mind if there was a benevolent and merciful God on high, he wouldn’t have let that woman out-waddle the fire only to fall in sight of certain safety. If people can explain that to me, meaningfully, I’d be happy. I stood where she fell, and reflected, and paid my respects. Meaning is hard to fathom.

This is an email that I sent to the bunch of guys that I kick a footy with on a Sunday morning, known as The Bang

” went up in the chopper yesterday, and set down in marysville, very sobering, very sad (have spent a  lot of time there over the years). as we flew up the road, i hadn’t realised we were in the town, until we hit them middle of it, nothing there. some incongruous things, the playground equipment, the swimming pool, and midst the devastation in the main street, a bright red post box, untouched, as though Australia Post had come in and put a new one in..the post must go on. sadly, not. many tragic stories, many people saved on the footy oval…something about the greater good of BANG!
thnx all for the support, truly amazing, the show goes on”

The reason I was in Marysville was for a workshop on economic recovery. it was a fantastic workshop, a small group of thoughtful, committed people grappling with some big issues, like why we struggle with economic recovery issues, what comes first, business or community recovery. Chicken or egg. Or is it an omelette. Griffith University and the Regional Australia Institute facilitated an excellent workshop.  http://regionalaustralia.org.au/rai-research-and-policy/research/disaster-recovery.  Like many of these workshops, there are no surprises for me (have I been around too long), but they are excellent opportunities to throw around good ideas.And I got to catch up with the incomparable Anne Leadbeater, who is one of my heroes. I resolved to incorporate more on economic recovery in the teaching I do, and to look at developing materials to help business prepare for disasters.

I drove away in the late afternoon light (after doing a bit of shopping) eating Rocky Road from  Marysville Patisserie, listening to Matt Walker’s Down From The Hills, and I realised I am fortunate and privileged. I have an amazing job.